Check out this page

to get to know more about me! 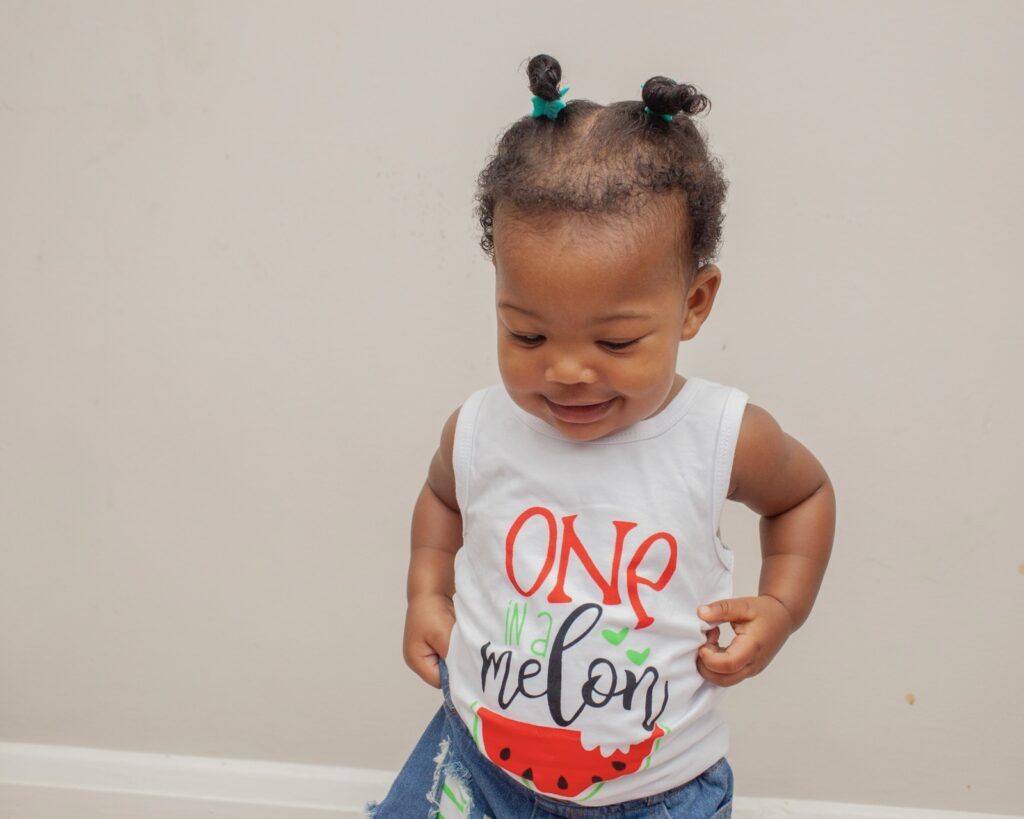 One in a Melon!

Sanai is One! My First Mom Year!

Last month we celebrated our baby girl’s 1st birthday! I was supposed to write this blog back then but with moving it was just not happening! I wanna reflect on what her first year was like because maybe it’s relatable or maybe you have better advice!

I will say the first few months were hard. I think I was trying to get back to the “Bethany” I used to be. I wanted to be there for people the same way I always had been. I learned that wasn’t really an option. Once I let go and started to embrace this new season of life without the need to control what that looked like I started to breathe easier. What I will remember most about the early days is how small she was! How I watched her tiny personality grow! I liked putting on her tiny outfits and watching everyone scream with joy when they saw her. She couldn’t move so that was a plus! Lol, that didn’t last long at all and I was genuinely surprised at this. One thing I can definitely say I miss is how snuggly she was. She would just let you hold her and she would always come to you. when she was full she would put her head down on your lap, it was cute. 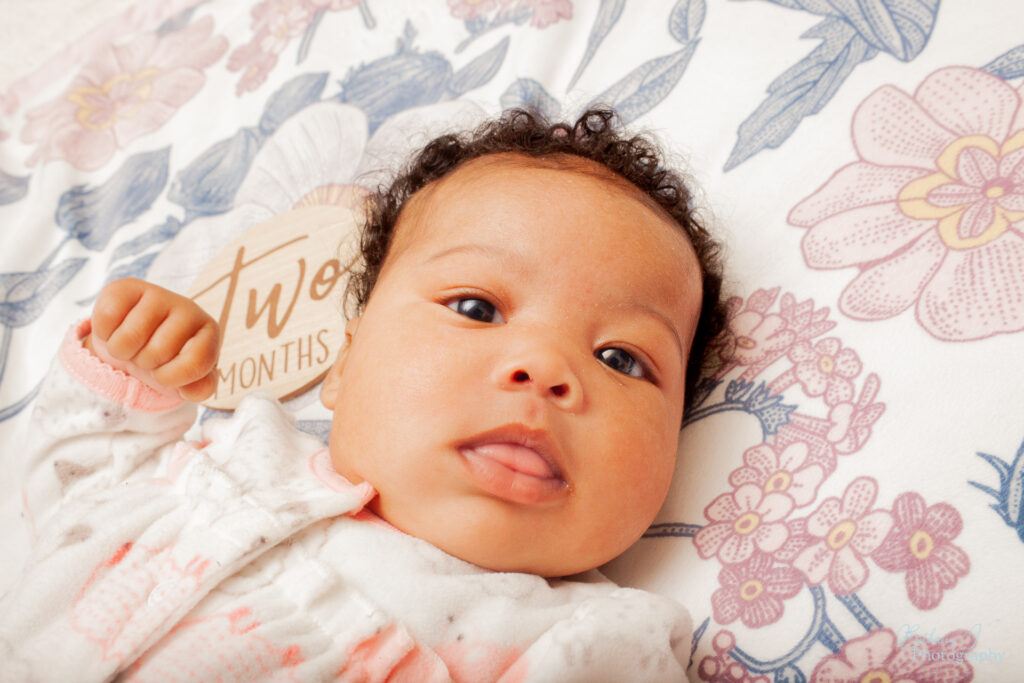 In the early stages, it was a lot of being there and just being still. Sometimes it was quiet and boring because she was sleeping and I couldn’t get up and being a busybody sometimes I felt trapped. Other times I felt like it was a God-built-in reminder to slow down and just enjoy the moment. Take a moment to slow down and breathe. When I started to slow down it helped me to have time to think through a lot of things I hadn’t felt or thought through. it allowed me to reflect on life and the decisions I made. I thought about things I wanted to change in my future and it also helped me to process a lot of my past.  This little baby girl started to change me in so many ways!

I think the other thing that was my favorite was seeing Jamal become a dad. When we met we were both pretty young. Jamal is obviously a teacher so he is good with kids but it’s really different and it’s really funny to see how he does things in his own way. It’s funny because she will copy him like saying “Ayyyy!” when hype music comes on. They have their own relationship and their own things! 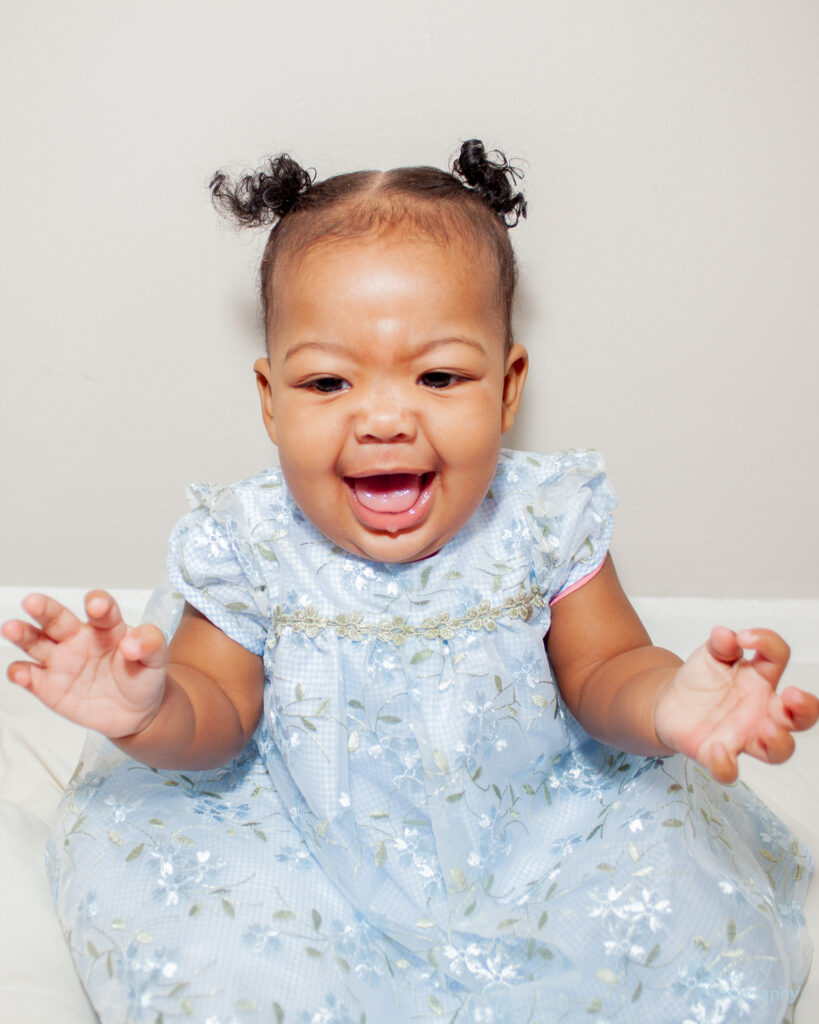 Around six months old every day got a little easier she was eating a little bit further apart. She still woke up all night but it just got a little bit easier. She started becoming mobile and on the one hand, I had to pay more attention because she would put everything in her mouth but also I was a little less worried about her rolling the wrong way. or breathing funny. That gave me less anxiety.

At 6 to 9 months so much growth happened I think this was definitely when things got more fun because her personality really started to show. She started eating different foods, she started trying to explore the world around her and would go on really fun adventures like trying to crawl ways that clearly she couldn’t crawl through and getting stuck then just laying there. I kept thinking there is this kid who I haven’t met yet, she was right in front of me but there are things about her that I don’t know yet, like how she will sound when she finally speaks. it’s almost like you’re meeting a new person every time she meets a new milestone. Every time she would she would say a new sound or word or when she was imitating the things we were saying- it blew my mind.

I started seeing “this is it! “- this is that different part of life people talk about and I feel so thankful that I get to experience it because I never really thought much about having kids. I always kind of just focused more on my career. So getting to see the joys of having a kid, the joys of her having an opinion about what she wants to eat, and learning to pay attention to her needs- My brain is changing and I don’t know who I’m going to be at the end of those changes. I’m OK with that!

There’s a different kind of confidence that I have. I know I am the decision-maker. Jamal and I are the decision-makers for this little girl. When I understand that, I feel grounded in the sense that I can’t be all over the place. Even when I’m scared I make decisions and know that they’re the best thing because she’s the one who’s going to be living out the consequences. That’s really heavy for sure but it’s also really grounding because as time goes by you get better and better at it. You learn more about yourself you learn more about the baby. I know about the things that work and don’t work and things get a little bit less scary. In the beginning, this was really new and really intense.  I grew up watching kids all the time, I have a little brother who I grew up watching but this was just different. 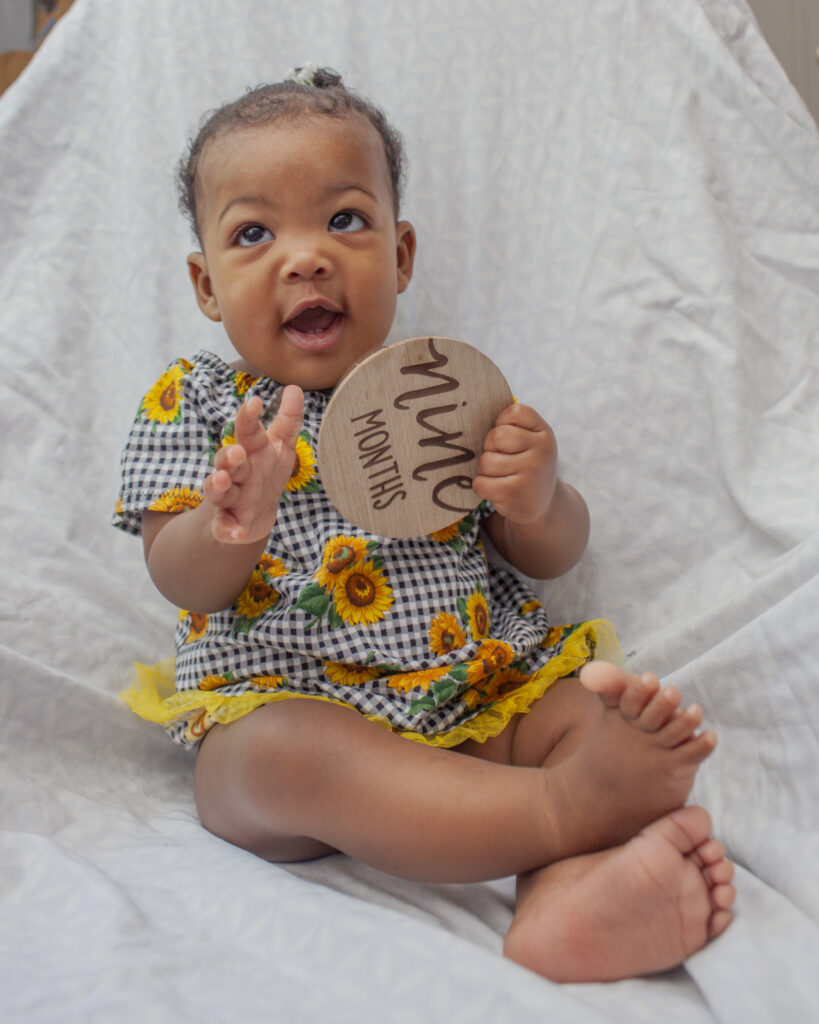 Now things got really fun after nine months. As she got closer to one she started to be able to walk. it’s just crazy cool! She also started to have so much personality and it’s funny because I was like where does this come from? She’ll laugh when everybody else is laughing as if she’s in on the conversation and she will cry, and it’s not funny that she’s crying, but she cries at really funny things. She would be trying to do something and get frustrated and it’s just funny to see her work it all out in her 1-year-old way. Sometimes you want to say “Let me help you!”  but no she wants to do it herself.

She has her opinions of what she wants and doesn’t want. The other night, for example, she would not go to bed it was 1 o’clock in the morning and since we moved, her bed is not in its crib right now so we were just laying her on her mattress. She just kept getting up! We would be in the living room and then suddenly would see her walk around the corner carrying her new teddy bear laughing like crazy. At that point, you either tell her to go back to bed but at the same time, it’s just so funny it makes me laugh!

I would say the other funny thing is that she will make faces like she doesn’t like something that you’re doing. She also has her friend named Audrey so she’ll say “Audrey!” and she’ll get her a little fake toy phone and talk on the phone with Audrey. She’ll walk around and just talk about Audrey. Stuff like that makes my day! Everything I say feels cliché but it’s just true! The world looks different because you’re seeing it through the eyes of this baby who just doesn’t know what’s up and that’s just funny to me. 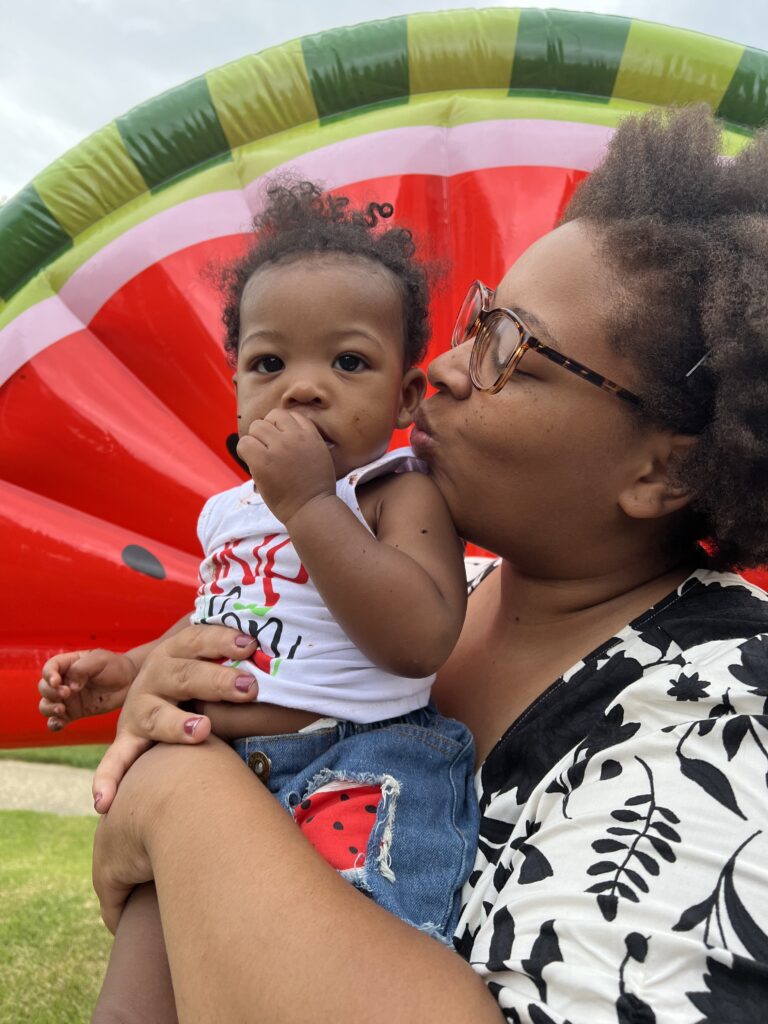 Sanai just turned one for her birthday! we decided to do a One in the Melon theme. if you follow me on Instagram you’ll see that I found these watermelon pools on Amazon ( I was super proud!) Side note. I am not a party planner by any means and I get really stressed out when I plan stuff and overdo it but I really wanted to plan this event. The whole goal of it was to keep it all really simple, I didn’t want to complicate anything. What inspired me was watching videos of my sisters and me at old birthday parties where it would be a few friends in the backyard and we would have some drinks it was so cute!

I thought to myself Sanai likes one thing and that’s water so I decided to re-create that childhood memory. We had two little pools and a taco bar! I’m definitely going to be doing it again at some point. I enjoyed it! It was adorable watching her with her friends in the pool, they had a blast.

I’ve got to wrap this blog up! I feel like her turning one was like me turning one too but one in mom years I still feel like the kid who just graduated college and suddenly I got this human who relies on me and Jamal for everything she needs. Making it through the first year was like making it over this really big hurdle and each day I am meeting this new little person who’s got all these new things happening all the time and it’s just exciting. 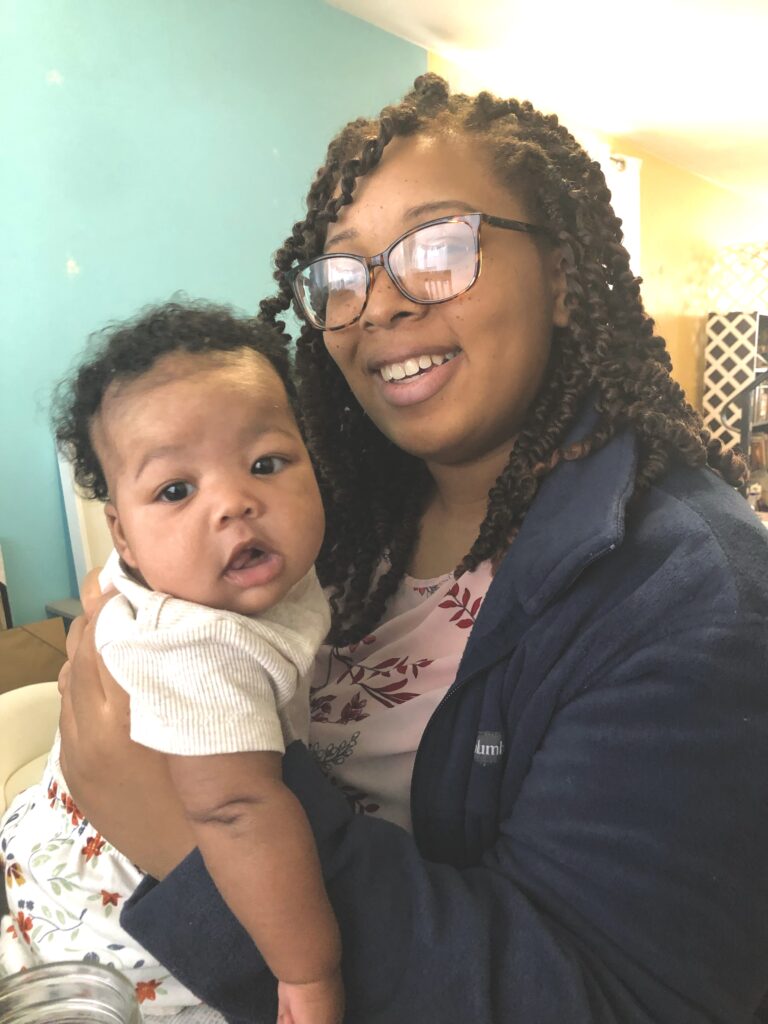 So yeah I’m just glad I survived the first year of being a mom. Good luck to you if you are in your first year of being a mom. I promise it does get better, it does get easier. Remember they don’t always require the same kind of care but they need you in different ways. It may feel like when they need you every two hours it’s gonna last forever but it does change and get easier. I really am seeing how God knows what He is doing. When you have your child you are equipped with everything you need, regardless of your expertise and experience, because what they need the most is you. You care about them the most and that’s the foundation. I believe that when they get older they’re not gonna remember that you gave them the wrong onesie or put them in the wrong diaper size or something like that. They just know that you’ve always been there for them. I think you should trust that instinct – it’s a solid instinct that you can rely on!

Any advice for a new mom though? Drop it in the comments below I’d love to hear what you think! Also, year two is coming so what is your advice for the toddler stage? I am just not quite ready for that! I feel like I get used to something and then something else changes and anyway I’m gonna stop writing now so thanks for reading!

Welcome to my blog. I talk about choosing joy, to me, that means believing God is good and there is hope in the face of difficulty. I also talk about my goals and challenges. I believe in perseverance, grit, dreaming big, and choosing to challenge yourself to be better than yesterday.

What does it mean to be a part of the #JoyJourney?

It means to choose JOY in the good and bad!

It means we focus on our goals!

It means we challenge ourselves to do better!

Wanna share your story? Join the #joyjourney in my FB group here! We encourage each other to accomplish more and meet up once a month for a nature walk!